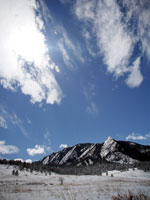 An estimated 53,000 people call Broomfield home. The city is approximately 33 square miles in size, and has housing choices to suit every buyer’s taste.

There is a high rate of home ownership in the city, which contributes greatly to the warm community feel that Broomfield is so known for. In order to maintain this close-knit neighborhood spirit, the area has been conceived and planned in a way that controls growth and maintains a high standard for Broomfield homes.

The city of Broomfield got its start in the 1870’s when it was a rail stop between Denver, Colorado and Cheyenne, Wyoming. In 1885, Adolph J. Zang, whose father owned the Zang Brewery in Denver, bought 4,000 acres from the Union Pacific Railroad and began a large farming operation. The community eventually became known as Zang’s Spur, and by 1900, was teeming with about 50 residents. It was later named after the local farms’ major crop—broom corn—which was used to make brooms.

Broomfield is located just off Hwy. 36, about 8 miles southeast of Boulder. The city was incorporated in 1961, and housed approximately 4,500 residents at the time. On Nov. 15, 2001, Broomfield officially became a county as well as a city.

Thank you for your inquiry.